Alaska Content and Performance Education Standards. What Is Percent? A percent is a term that describes a decimal in terms of one hundred. Percent means per hundred. Percents, fractions and decimals all can equal each other, as in the case of 10%, 0.1 and 1/10. Percents can be greater than 100% or smaller than 1%. A markup from the cost of making an item to the actual sales price is usually greater than 100%. A salesperson's commission might be 1/2% depending on the item sold. Read More... 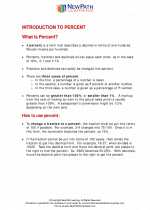 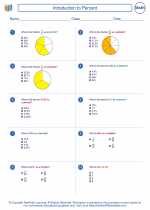 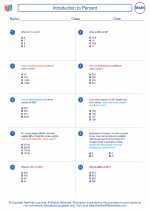 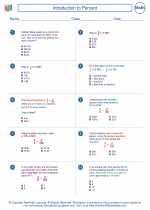 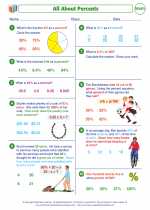 AK.7.RP. Ratios and Proportional Relationships
Analyze proportional relationships and use them to solve real-world and mathematical problems.
7.RP.3. Use proportional relationships to solve multistep ratio and percent problems. Examples: simple interest, tax, markups and markdowns, gratuities and commissions, fees, percent increase and decrease, percent error.
AK.7.NS. The Number System
Apply and extend previous understandings of operations with fractions to add, subtract, multiply, and divide rational numbers.
7.NS.2. Apply and extend previous understandings of multiplication and division and of fractions to multiply and divide rational numbers and use equivalent representations.
7.NS.2.d. Convert a rational number to a decimal using long division; know that the decimal form of a rational number terminates in 0s or eventually repeats.
7.NS.2.e. Convert between equivalent fractions, decimals, or percents.
7.NS.3. Solve real-world and mathematical problems involving the four operations with rational numbers. (Computations with rational numbers extend the rules for manipulating fractions to complex fractions.) For example, use models explanations, number lines, real life situations, describing or illustrating the effect of arithmetic operations on rational numbers (fractions, decimals).
AK.7.EE. Expressions and Equations
Solve real-life and mathematical problems using numerical and algebraic expressions and equations.
7.EE.3. Solve multi-step real-life and mathematical problems posed with positive and negative rational numbers in any form and assess the reasonableness of answers using mental computation and estimation strategies. For example: If a woman making $25 an hour gets a 10% raise, she will make an additional 1/10 of her salary an hour, or $2.50, for a new salary of $27.50. If you want to place a towel bar 9 3/4 inches long in the center of a door that is 27 1/2 inches wide, you will need to place the bar about 9 inches from each edge; this estimate can be used as a check on the exact computation.
7.EE.4. Use variables to represent quantities in a real-world or mathematical problem, and construct multi-step equations and inequalities to solve problems by reasoning about the quantities.
7.EE.4.a. Solve word problems leading to equations of the form px + q = r and p(x + q) = r, where p, q, and r are specific rational numbers. For example, the perimeter of a rectangle is 54 cm. Its length is 6 cm. What is its width?
Standards