Ohio Learning Education Standards. Patterns in geometry refer to shapes and their measures. Shapes can be congruent to one another. Shapes can also be manipulated to form similar shapes. The types of transformations are reflection, rotation, dilation and translation. With a reflection, a figure is reflected, or flipped, in a line so that the new figure is a mirror image on the other side of the line. A rotation rotates, or turns, a shape to make a new figure. A dilation shrinks or enlarges a figure. A translation shifts a figure to a new position. Read More... 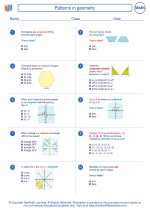 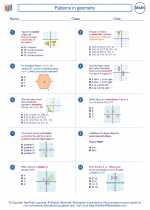 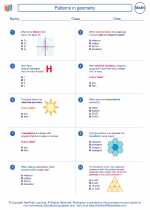 OH.8.NS. THE NUMBER SYSTEM
Know that there are numbers that are not rational, and approximate them by rational numbers.
8.NS.1. Know that real numbers are either rational or irrational. Understand informally that every number has a decimal expansion which is repeating, terminating, or is non-repeating and non-terminating.
OH.8.G. GEOMETRY
Understand congruence and similarity using physical models, transparencies, or geometry software.
8.G.1. Verify experimentally the properties of rotations, reflections, and translations (include examples both with and without coordinates).
8.G.1.a. Lines are taken to lines, and line segments are taken to line segments of the same length.
8.G.1.b. Angles are taken to angles of the same measure.
8.G.1.c. Parallel lines are taken to parallel lines.
8.G.2. Understand that a two-dimensional figure is congruent to another if the second can be obtained from the first by a sequence of rotations, reflections, and translations; given two congruent figures, describe a sequence that exhibits the congruence between them. (Include examples both with and without coordinates.)
Standards