Next Generation Science Education Standards (NGSS Comprehensive). Light is a form of energy that travels in waves. A reflection occurs when light rays bounce off a surface, such as when you see your reflection in a mirror. Absorption is when an object takes in light wave. Refraction is when light bends moving from one medium to another. Sound is a type of energy that travels in waves that is caused by vibrations. Vibrations are movements made rapidly back and forth. Read More... 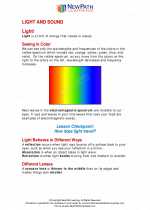 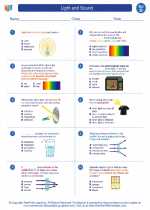 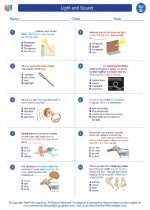 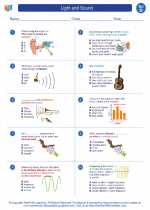 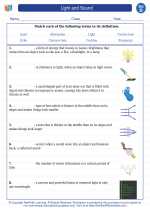 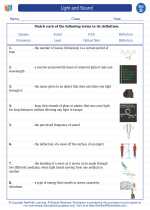 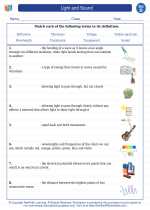 NGSS.4-PS. PHYSICAL SCIENCE
4-PS3. Energy - Students who demonstrate understanding can:
4-PS3-2. Make observations to provide evidence that energy can be transferred from place to place by sound, light, heat, and electric currents.
4-PS3.DCI. Disciplinary Core Ideas
PS3.B: Conservation of Energy and Energy Transfer
PS3.B:2. Light also transfers energy from place to place. (4-PS3-2)
4-PS4. Waves and their Applications in Technologies for Information Transfer - Students who demonstrate understanding can:
4-PS4-1. Develop a model of waves to describe patterns in terms of amplitude and wavelength and that waves can cause objects to move.
4-PS4.DCI. Disciplinary Core Ideas
PS4.A: Wave Properties
PS4.A:1. Waves, which are regular patterns of motion, can be made in water by disturbing the surface. When waves move across the surface of deep water, the water goes up and down in place; it does not move in the direction of the wave except when the water meets the beach. (Note: This grade band endpoint was moved from K–2). (4-PS4-1)
PS4.A:2. Waves of the same type can differ in amplitude (height of the wave) and wavelength (spacing between wave peaks). (4-PS4-1)
Standards