New York State Learning Education Standards and Core Curriculum. Life in the new colonies was often challenging. While the settlers were free from the restrictions of life in European society, they also did not have the amenities of European life in the 1600s. Many families in the colonies worked on a small farm. The roles of society in colonial America were clearly defined. Men were the decision-makers, and women were in a supporting role. Read More... 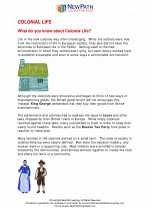 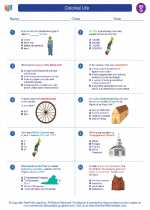 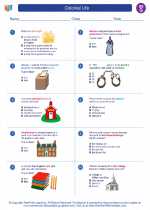 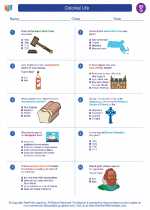 NY.RH.5-8. Reading Standards for Literacy in History/Social Studies
Craft and Structure
RH.5-8.4. Determine the meanings of words and phrases as they are used in a text, including vocabulary specific to domains related to history/social studies.
RH.5-8.5. Describe how a text presents information (e.g., sequentially, comparatively, causally).
Range of Reading and Level of Text Complexity
RH.5-8.10. By the end of grade 8, read and comprehend history/social studies texts in the grades 5-8 text complexity band independently and proficiently.
NY.7P. Grade 7: Social Studies Practices
7P.A. Gathering, Interpreting, and Using Evidence
7P.A.1. Define and frame questions about the United States that can be answered by gathering, interpreting, and using evidence.
7P.A.5. Make inferences and draw general conclusions from evidence.
7P.B. Chronological Reasoning
7P.B.3. Identify causes and effects, using examples from current events, grade-level content, and historical events.
7P.C. Comparison and Contextualization
7P.C.1. Identify a region of colonial North America or the early United States by describing multiple characteristics common to places within it, and then identify other similar regions (inside or outside the continental United States) with similar characteristics.
7P.C.6. Understand the roles that periodization and region play in developing the comparison of colonial settlements in North America. Identify general characteristics that can be employed to conduct comparative analyses of case studies in the early history of the United States.
NY.7. History of the United States and New York State I
7.2. COLONIAL DEVELOPMENTS: European exploration of the New World resulted in various interactions with Native Americans and in colonization. The American colonies were established for a variety of reasons and developed differently based on economic, social, and geographic factors. Colonial America had a variety of social structures under which not all people were treated equally. (Standards: 1, 2, 3, 4; Themes: MOV, GEO, ECO, TECH, EXCH)
7.2c. European nations established colonies in North America for economic, religious, and political reasons. Differences in climate, physical features, access to water, and sources of labor contributed to the development of different economies in the New England, Middle, and Southern Colonies.
7.2c.2. Students will examine the economic, social, and political characteristics of each colonial region.
7.2d. In New York, the Dutch established settlements along the Hudson River and the French established settlements in the Champlain Valley. Dutch contributions to American society were long-lasting.
7.2d.1. Students will compare and contrast the early Dutch settlements with French settlements and with those in the subsequent British colony of New York in terms of political, economic, and social characteristics, including an examination of the patroon system.
Standards