Utah Core Education Standards. European exploration in North America began with Christopher Columbus’ discovery of what he thought was Asia. Since that time, there have many attempts by Europeans to settle in America, some successful, others not. There are many reasons why Europeans settled outside of Europe. Political, social, and economic forces encouraged the exploration of the New World, and money was almost always a motivating factor in the settlement of new colonies. Read More... 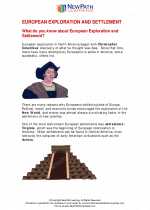 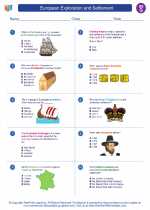 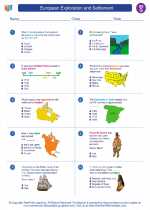 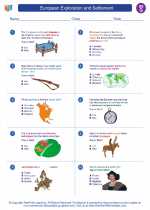 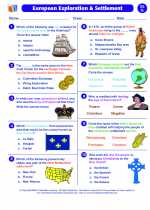 UT.USI. UNITED STATES HISTORY I
USI.1. THREE WORLDS MEET (Prehistory–Ca. 1650)
Europe’s exploration of America had a profound impact on the world. For thousands of years, complex and sophisticated American Indian civilizations had flourished in the Americas, separated from other parts of the world by vast bodies of water. After Columbus’ arrival, the lands of the Western Hemisphere were forever connected to the rest of the world. The international slave trade forced millions of Africans to the Americas, bringing these “three worlds” together in unprecedented ways. Patterns of trade, exploration, conquest, and settlement have ramifications that continue to the present day.
USI.1.3. Students will draw from multiple perspectives and cite evidence to explain the effects of European exploration, specifically on Africa, the Caribbean, and North and South America.
USI.2. COLONIZATION (Ca. 1565–1776)
Driven by economic, religious, and political opportunities, colonial powers from Europe established footholds, then empires in North America. Many colonists fled poverty or persecution to start new lives in an unfamiliar land. Africans were enslaved and brought to the Americas against their will. Interactions between colonists and the indigenous peoples living in North America added complexity to the colonies. Geographic and cultural factors influenced where colonists settled and how they lived. Sectional and regional differences emerged that would affect American history. Patterns established within the English colonies on the Eastern seaboard would shape many of the dominant political, economic, linguistic, and religious traditions of the United States.
USI.2.1. Students will identify the economic, social, and geographic factors that influenced the colonization efforts of the Dutch, English, French, and Spanish.
USI.2.2. Students will compare and contrast the economic, political, and social patterns evident in the development of the 13 English colonies.
USI.2.3. Students will use primary sources as evidence to contrast the daily life and contexts of individuals of various classes and conditions in and near the English colonies, such as gentry, planters, women, indentured servants, African slaves, landowners, and American Indians.
USI.2.4. Students will explain historic and modern regional differences that had their origins in the colonial period, such as the institution of slavery; patterns of life in urban and rural areas; differences between the French continental interior, Spanish southwest, and English northeast; and the location of manufacturing centers.
UT.CC.RH.6-8. Reading Standards for Literacy in History/Social Studies
Craft and Structure
RH.6-8.4. Determine the meaning of words and phrases as they are used in a text, including vocabulary specific to domains related to history/social studies.
RH.6-8.5. Describe how a text presents information (e.g., sequentially, comparatively, causally).
Range of Reading and Level of Text Complexity
RH.6-8.10. By the end of grade 8, read and comprehend history/social studies texts in the grades 6-8 text complexity band independently and proficiently.
Standards