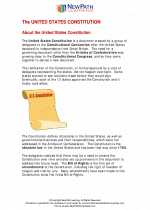 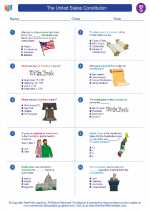 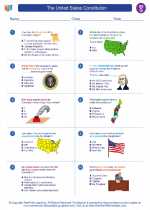 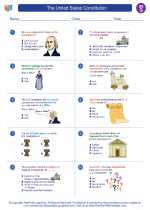 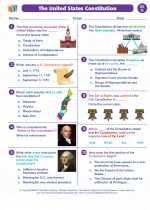 AK.A. Government and Citizenship: A student should know and understand how societies define authority, rights, and responsibilities through a governmental process. A student who meets the content standard should:
A.2. Understand the meaning of fundamental ideas, including equality, authority, power, freedom, justice, privacy, property, responsibility, and sovereignty.
AK.B. Government and Citizenship: A student should understand the constitutional foundations of the American political system and the democratic ideals of this nation. A student who meets the content standard should:
B.1. Understand the ideals of this nation as expressed in the Declaration of Independence, the United States Constitution, and the Bill of Rights.
B.2. Recognize American heritage and culture, including the republican form of government, capitalism, free enterprise system, patriotism, strong family units, and freedom of religion.
B.3. Understand the United States Constitution, including separation of powers, the executive, legislative, and judicial branches of government, majority rule, and minority rights.
B.7. Distinguish between constitution-based ideals and the reality of American political and social life.
AK.A. History: A student should understand that history is a record of human experiences that links the past to the present and the future. A student who meets the content standard should:
A.7. Understand that history is dynamic and composed of key turning points.
AK.B. History: A student should understand historical themes through factual knowledge of time, places, ideas, institutions, cultures, people, and events. A student who meets the content standard should:
B.2. Understand the people and the political, geographic, economic, cultural, social, and environmental events that have shaped the history of the state, the United States, and the world.
AK.RH.6-8. Reading Standards for Literacy in History/Social Studies 6-12
Craft and Structure
RH.6-8.4. Determine the meaning of words and phrases as they are used in a text, including vocabulary specific to domains related to history/social studies.
RH.6-8.5. Describe how a text presents information (e.g., sequentially, comparatively, causally)
Range of Reading and Level of Text Complexity
RH.6-8.10. By the end of grade 8, read and comprehend history/social studies texts in the grades 6-8 text complexity band independently and proficiently.
Standards