U.S. National Education Standards. Ancient Egypt refers to the people and area surrounding the Nile River in Africa. This period of history called Ancient Egypt extends beyond the 3000 BC-1200 BC era. During this time period, Ancient Egypt saw the rise of the Early Dynastic Period to the fall of the New Kingdom. Many things happened during those times, such as the creation of the pyramids, the creation of paper, and the growth of a writing system called hieroglyphics. Read More... 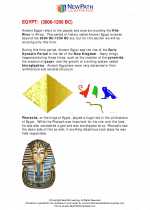 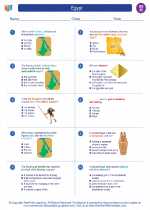 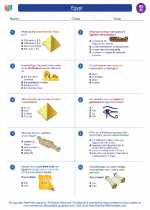 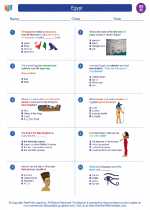 N.NCSS. National Curriculum Standards for Social Studies (NCSS)
NCSS.2. TIME, CONTINUITY, AND CHANGE
SOCIAL STUDIES PROGRAMS SHOULD INCLUDE EXPERIENCES THAT PROVIDE FOR THE STUDY OF THE PAST AND ITS LEGACY.
2.1. KNOWLEDGE - Learners will understand:
2.1.5. Key historical periods and patterns of change within and across cultures (e.g., the rise and fall of ancient civilizations, the development of technology, the rise of modern nation-states, and the establishment and breakdown of colonial systems).
N.NCHS. National Center for History in Schools (NCHS)
NCHS.HT. Historical Thinking Standards
HT.2. Historical Comprehension
HT.2.B. Reconstruct the literal meaning of a historical passage.
NCHS.WH. World History Content Standards
WH.2. Era 2: Early Civilizations and the Emergence of Pastoral Peoples, 4000-1000 BCE
WH.2.1. The major characteristics of civilization and how civilizations emerged in Mesopotamia, Egypt, and the Indus valley.
WH.2.1A. The student understands how Mesopotamia, Egypt, and the Indus valley became centers of dense population, urbanization, and cultural innovation in the fourth and third millennia BCE.
WH.2.1B. The student understands how commercial and cultural interactions contributed to change in the Tigris-Euphrates, Indus, and Nile regions.
WH.2.2. How agrarian societies spread and new states emerged in the third and second millennia BCE.
WH.2.2B. The student understands how new centers of agrarian society arose in the third and second millennia BCE.
WH.2.3. The political, social, and cultural consequences of population movements and militarization in Eurasia in the second millennium BCE.
WH.2.3B. The student understands the social and cultural effects that militarization and the emergence of new kingdoms had on peoples of Southwest Asia and Egypt in the second millennium BCE.
WH.2.4. Major trends in Eurasia and Africa from 4000-1000 BCE.
WH.2.4A. The student understands major trends in Eurasia and Africa from 4000 to 1000 BCE.
WH.3. Era 3: Classical Traditions, Major Religions, and Giant Empires, 1000 BCE-300 CE
WH.3.1. Innovation and change from 1000-600 BCE horses, ships, iron, and monotheistic faith.
WH.3.1C. The student understands how states developed in the upper Nile valley and Red Sea region and how iron technology contributed to the expansion of agricultural societies in Sub-Saharan Africa.
Standards