New York State Learning Education Standards and Core Curriculum. After World War I and the Great Depression, many countries all over the world were trying to come back from an economic recession. Adolf Hitler, the leader of a party developed a philosophy for Germany and ignore the Treaty of Versailles. Soon, Germany was at war with many European countries and so began the reign of the Nazi Party. Germany soon invaded Poland and World War II was set in motion. Read More... 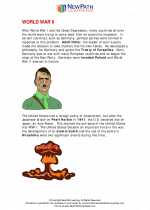 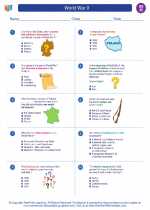 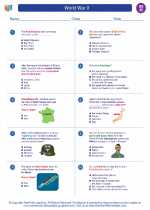 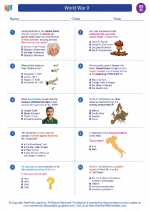 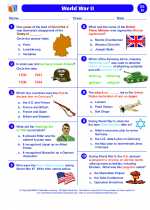 NY.RH.5-8. Reading Standards for Literacy in History/Social Studies
Craft and Structure
RH.5-8.4. Determine the meanings of words and phrases as they are used in a text, including vocabulary specific to domains related to history/social studies.
RH.5-8.5. Describe how a text presents information (e.g., sequentially, comparatively, causally).
Range of Reading and Level of Text Complexity
RH.5-8.10. By the end of grade 8, read and comprehend history/social studies texts in the grades 5-8 text complexity band independently and proficiently.
NY.8P. Grade 8: Social Studies Practices
8P.A. Gathering, Interpreting, and Using Evidence
8P.A.1. Define and frame questions about the United States and answer them by gathering, interpreting, and using evidence.
8P.B. Chronological Reasoning
8P.B.4. Identify, analyze, and evaluate the relationship between multiple causes and effects.
8P.B.5. Distinguish between long-term and immediate causes and effects of an event from current events or history.
NY.8. History of the United States and New York State II
8.4. WORLD WAR I AND THE ROARING TWENTIES: Various diplomatic, economic, and ideological factors contributed to the United States decision to enter World War I. Involvement in the war significantly altered the lives of Americans. Postwar America was characterized by economic prosperity, technological innovations, and changes in the workplace. (Standards: 1, 2, 4; Themes: SOC, GOV, ECO, TECH)
8.4d. Following extensive political debate, the United States refused to ratify the Treaty of Versailles. The United States then sought to return to prewar policies by focusing on domestic rather than international matters.
8.4d.1. Students will examine Wilson’s Fourteen Points and investigate reasons why the United States Senate refused to support the Treaty of Versailles, focusing on opposition to the League of Nations.
8.6. WORLD WAR II: The aggression of the Axis powers threatened United States security and led to its entry into World War II. The nature and consequences of warfare during World War II transformed the United States and the global community. The damage from total warfare and atrocities such as the Holocaust led to a call for international efforts to protect human rights and prevent future wars. (Standards: 1, 2, 3; Themes: TCC, GOV, TECH, EXCH)
8.6b. From 1939 to 1941, the United States government tried to maintain neutrality while providing aid to Britain but was drawn into the war by the Japanese attack on Pearl Harbor. The United States fought a war on multiple fronts. At home, the economy was converted to war production, and essential resources were rationed to ensure adequate supplies for military use.
8.6b.1. Students will examine American involvement in World War II, including the American strategy in the Pacific and the invasion of Normandy on D-Day.
8.6c. The nature and consequences of warfare during World War II transformed the United States and the global community. The damage from total warfare and human atrocities, including the Holocaust, led to a call for an international organization to prevent future wars and the protection of human rights.
8.6c.1. Students will examine the role of air power by the allies, including the use of the atomic bombs on Hiroshima and Nagasaki.
8.6c.2. Students will investigate the Holocaust and explain the historical significance of the Nuremberg trials.
Standards