What is a Notable Person? A notable person is a person who contributes to a cause in a special way. Many people contributed toward the westward expansion of the United States during the 1800's. Notable People related to the Louisiana Purchase were: Thomas Jefferson, Meriwether Lewis, William Clark, Napoleon, Sacajawea. People related to Texas and the Alamo were: Santa Anna, Susannah Dickinson, Stephen Austin, Jim Bowie, William Travis, Davy Crockett, Sam Houston, President James K. Polk. Read More... 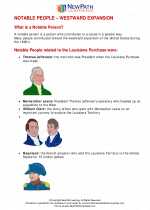 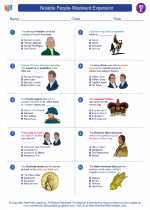 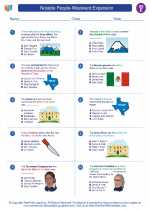 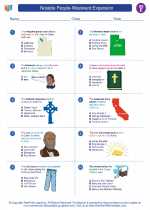 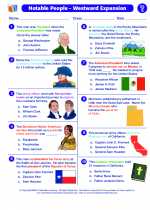 National Standards for Civics and Government (NSCG)
What are the foundations of the American political system? What are the distinctive characteristics of American society?
Distinctive characteristics of American society. Students should be able to identify and explain the importance of historical experience and geographic, social, and economic factors that have helped to shape American society. To achieve this standard, students should be able to
Explain important factors that have helped shape American society
Effects of a frontier
National Center for History in Schools (NCHS)
Historical Thinking Standards
Historical Comprehension
Reconstruct the literal meaning of a historical passage.
United States History Content Standards
Era 4: Expansion and Reform (1801-1861)
United States territorial expansion between 1801 and 1861, and how it affected relations with external powers and Native Americans.
The student understands the international background and consequences of the Louisiana Purchase, the War of 1812, and the Monroe Doctrine.
The student understands the ideology of Manifest Destiny, the nation's expansion to the Northwest, and the Mexican-American War.
How the industrial revolution, increasing immigration, the rapid expansion of slavery, and the westward movement changed the lives of Americans and led toward regional tensions.
The student understands the settlement of the West.
Era 6: The Development of the Industrial United States (1870-1900)
How the rise of corporations, heavy industry, and mechanized farming transformed the American people.
The student understands how agriculture, mining, and ranching were transformed.